Between 29.9.2015 and 2.10.2015 a glacial outburst flood occured in Skaftá river. The floodwater drained from the eastern Skaftá ice cauldron, located at western Vatnajökull, and peaked at more than 2100 m³/s, being the largest Skaftá jökulhlaup (see news at www.vedur.is). The national Ring Road was partly flooded.

Floods in Skaftá are sourced from two ice cauldrons, formed due to persistent geothermal activity beneath Vatnajökull. The last jökulhlaup from the eastern cauldron occured in 2010, from the western cauldron in January 2014 (see results).

Geothermal heat causes ice melting. The water pressure initially causes a smoothing of the cauldron, as can be seen on the Sentinel image from 14.8.2015. On the image from 1.10.2015 again a depression becomes apparent, because the cauldron started to drain. The image from 13.10.2015 marks the end of the jökulhlaup, showing a 4.3 km² large cauldron surrounded by crevasses due to ice subsidence.

The TerraSAR-X image reveals the path of the flood beneath the ice of Vatnajökull.

Click on the image for a detailed view of the ice cauldrons: 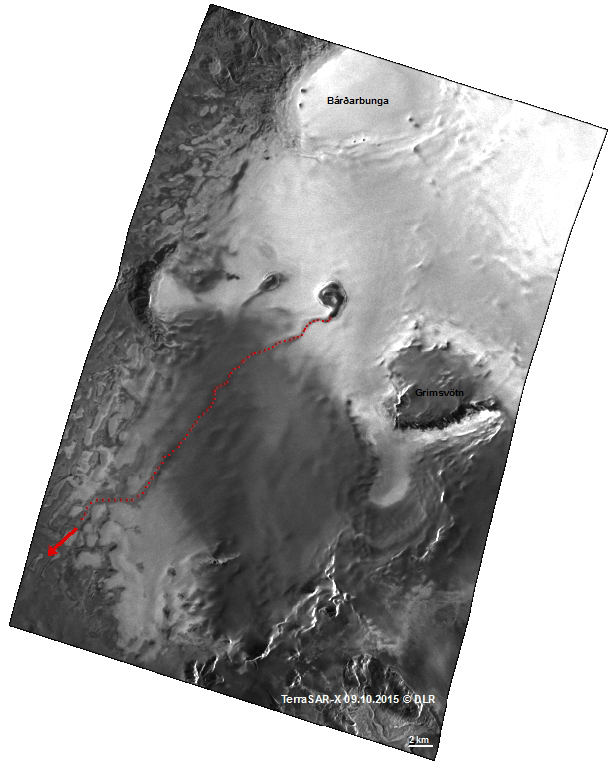